“If you’ve ever tied to put your finger up a straight guy’s ass during sex, you’ll know that they actually understand ongoing consent, withdrawal of consent and sexual boundaries very well. They act confused when it’s our bodies.”

I know guys. That was one hell of a starter.

As you may have gleaned, this post is about the infantilization of men especially in the context of (sexual) violence against women.

A well-meaning man at a forum I attended a few months ago asked/suggested that maybe men should be educated on the specifics of sexual harassment because maybe they don’t mean to harass women, we just might have different definitions.

At face value, this seems like a rather reasonable request. But think about it and you realise it plays right into a culture that excuses men’s horrible behavior by citing a masculine trait that is apparently beyond their control.

Right from birth, men are socialized to pen their very survival and some more on the women around them. Women do everything right from cooking to cuddling their egos. As result, we have an entire gender that not only feels entitled to women (our bodies, labour, loyalty, etc) but also simultaneously disregards and blames women should any misfortune befall them. Case in point, the mere existence of the word emasculation. Side bar: have you ever wondered what the female version of this word is? That’s right, there’s no word that describes making something less feminine. This makes sense because throughout history, femininity has been the lowest form of humanity so there would be no need for such a word. But really, the fact that men needed a word to describe the act of being made to feel less masculine implies that from the beginning of time, men have been pointing fingers at everything and everyone else.

So let’s explore this ridiculous premise; this idea that men might not quite understand when they’ve sexually harassed a woman. Men are functioning, somewhat well-adjusted beings. The average man has a good understanding of social, verbal and non-verbal ques. They know shaking my head means disagreement and an outstretched palm means a handshake. They know to knock on doors before going in and to never look at another man’s penis in the urinal. They know not to comment about another guy’s ass or use sexual innuendo with a random guy. So why would they turn around and claim that putting their hands on your butt, or gawking at your breasts was all in good faith; that it was a complement?

While we’re on “complements”, let’s talk cat-calling. Women have been told countless times to lighten up, to take cat-calls for what men intended them to be: complements. And it’s ironic because men that cat-call you on the street do not expect you to be wooed, so much so, you’d abandon your plans to go have sex with them. They know it’ll make you uncomfortable and scared. They don’t do it because they are complementing you, they do it because they have the power to make you feel unsafe; because they feel entitled to your body and attention; because they never leant to express interest and affection in non-violent ways.

So this idea that men are well meaning, that sexual harassment is nothing more than misunderstanding on the women’s part and child-like ignorance on the men’s part is obviously false and dangerous. It’s just another creation of the patriarchy; a system that never runs out of ways to make sure men come out on top. It basically just says, we’re going to declare this gender superior and socialize it to oppress and deny the agency of all other genders. But should that backfire, should these other genders tire of the aggressions, let’s just market this superior gender as lovable and broken people whose humanity accords them the privilege of error. That way, we still get to burden the oppressed with the responsibility of educating their oppressors. That should keep them so busy, maybe they forget to dismantle the system.

As a principle, I don’t indulge any form of misogyny, I don’t care how innocent or well-meaning the utterance is. I don’t care if I waste an opportunity to recruit an ally. Recruiting allies (especially male ones) isn’t a tenet of my feminist agenda. I wasn’t always like that though. I once wasted my afternoon trying to explain to some people that consent can be withdrawn mid-sex. To date, the thing that stuck with me is how these men kept circling around blue balls. How they expected me to care more about their interrupted pleasure than a woman’s safety. How they were genuinely convinced that not raping a woman made them victims. I still cringe at how, amid my frustration and hurt at the reminder that even men I trusted had probably at some point stripped a woman of her sexual agency, I still was somewhat complicit because I just shut down and let them think I agreed that it would be unfair to the man should the woman withdraw consent.

But that’s just the thing. Men are conditioned to believe they have no control over their sexual urges. And it’s so funny how they never seem to see how the hysexualisation of men is a double-edged sword. Hypersexualisation is why male survivors of sexual trauma rarely open up and when they do, they are ridiculed. Hypersexulaisation of men; the fallacy that men always want sex, is why statutory rape cases are rarely in the favour of underage boys because we view consent as something only women give, ergo rape is something that only happens to women. But I get it, why would you flip that coin if this side means you can blame the length of a woman’s skirt or her drunken state after raping her? I mean it certainly wasn’t your fault that she served so much leg knowing too well you are a slave to your sexual urges. Why would we care if it humanizes men even when they’ve dehumanized women? Why would we care if it accords their careers and reputations consideration over the lives of women?

After all, they’re mere mortals that made mistakes; men that didn’t know any better; broken men that have been through trauma.

And because they’ve been through trauma (unlike the rest of the human population) they get a free pass at turning women into collateral damage while they heal. Hurt people, hurt people. It’s as lazy and as offensive a statement as it is true. If you spend your life running away from your emotions and never doing the work to heal, you (in) advertently leave a trail of broken hearts. Except women are hurting too, but we don’t go around starting wars and plundering society. Male hurt on the other hand is almost always taken out on women and children. Case example, “my father was emotionally distant and as a result, I never learnt how to love so I’m going to go through life sucking the life out of every woman who tries to love me.” Or, “my father was physically abusive so I am.”

But women also grew up with emotionally distant and/or abusive fathers. So what makes men so entitled that they think it’s perfectly okay to only silence women but also demand that we consider their mental and emotional scars that somehow justify their violence? What makes them think it’s okay to demand that women put aside their pain and anger and instead gently explain to them how they are oppressing us. How it is that men can threaten to withdraw their support (essentially the belief in women’s rights) because we hurt their feelings? You guessed right, men believe their pain and anger is more important than ours. That because society never equipped them with the tools to express and deal with their emotions, the rest of us should tiptoe around their feelings. That because they are broken, we should put the quest for our emancipation on pause.

Infantilization of men ensures that masculinity, no matter how toxic in execution, will always trump the humanity of women. It means men continue to feel entitled to women’s emotional and physical labour. So even when we think they are being progressive and admitting to their brokenness and how it’s affecting the women around them, they still expect the women in their lives to heal them: to listen to them and love and put up with them till they are better. Nobody tells men to learn to be there for each other, to actually perform emotional labour for and amongst themselves, that is still left for women. It means they still look up to and blame feminists when the patriarchy screws them. It means men get to create problems for women, avoid accountability and place the responsibility of fixing those problems to women. 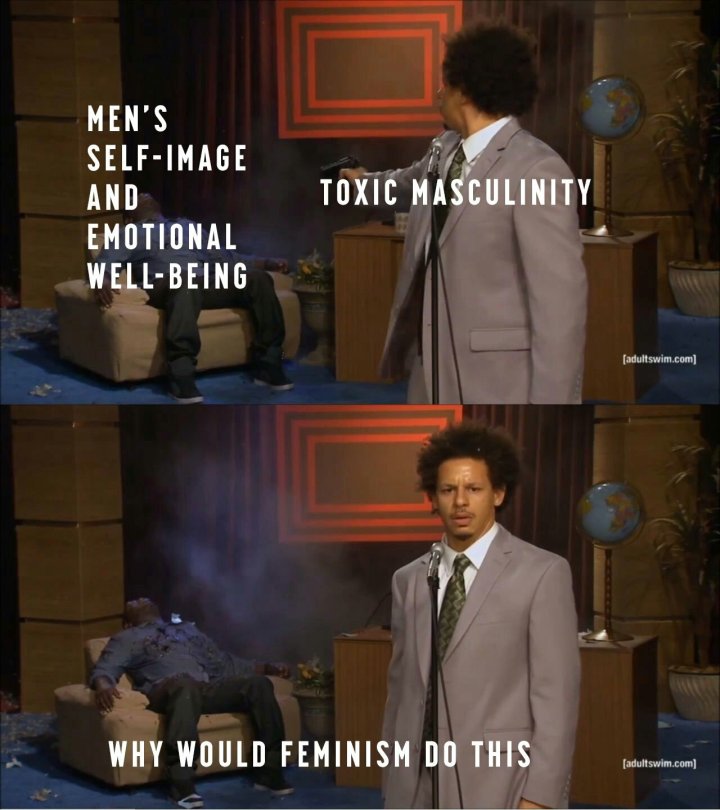 But that’s just the patriarchy really; it’s a series of moving goal posts, all to the benefit of men. It’s how men can’t control their sexual urges but are somehow naturally predisposed for leadership because women are too hormonal. It would be appreciated if you could write a script and stick to it. I for one, respect commitment to a fallacy.

4 thoughts on “Infantilization of men.”

This site uses Akismet to reduce spam. Learn how your comment data is processed.